Back in the middle of July we had a game of Post of Honour, the fast play version of Osprey's Honours of War rules which can be found on the Honours of War forum. For this game the scenario was based of the Battle of Dettingen from the War of Austrian Succession. The battle is known for being the last time a reigning British monarch, George II, led troops in battle.

A combined British, Hanoverian and Austrian force heading for their supply depots find a French force blocking their path with further French forces rapidly approaching to their rear.
Our game focused on the lead elements of the allies trying to force a path through the French blocking force.


The French hold a strong position behind streams and marshy ground with artillery across the unfordable river Main on the allies left flank.
The French started with some troops across the streams to represent the historical battle where the French commander ignored his orders and advanced his whole command over the bridge to fight with his back to the streams and marshes. Unfortunately our French players chose not to repeat his mistake.

The British advanced towards the forward French units of the Garde du Corps and Maison de Roi all the while coming under artillery fire from across the river.


In the centre the Austrians, my command, advanced towards the french deploying behind the marshy ground.


The plan on the right was for the Hanoverians to advance quickly around the edge of the marsh to threaten the French left, and this was going well until French re-enforcements appeared out of the wooded high ground to their flank.

After a hard scrap the British saw off the leading French units and continued to advance on Dettingen, the Austrians made it to the marsh and began the slow process of crossing it under sustained French fire and the Hanoverians found themselves fighting on two fronts under the inspirational leadership of King George himself.


With the French now pushed back into the defensive position of Dettingen their resolve stiffened as did that of the units pouring fire into the brave Austrians slogging through the marsh to come to grips with their tormentors. On the right the Hanoverians manged to hold against the pressure from two flanks but were pushed back towards the supporting Austrian cavalry.

With no way through for the allies and the main French army rapidly approaching to the rear the umpire called the game. Unlike in the historical battle, this time King George would have to negotiate terms with the surrounding French. 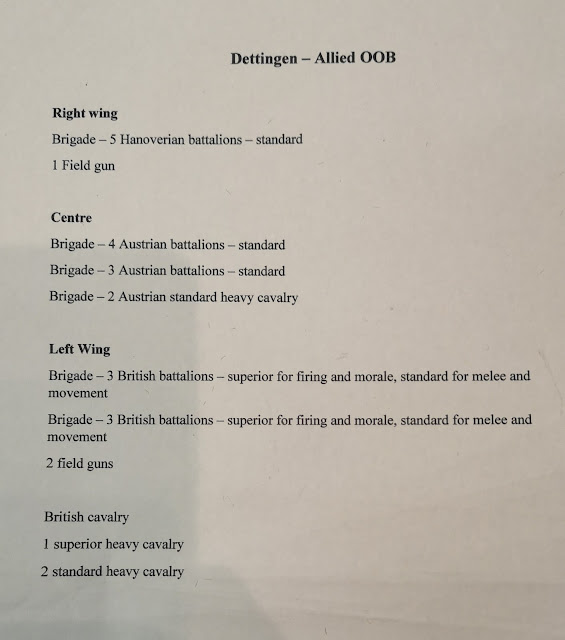 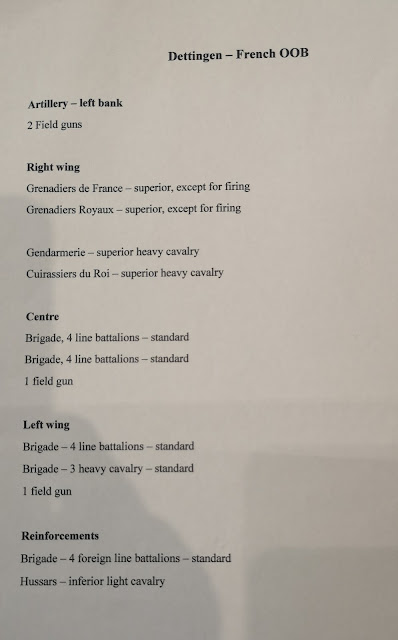 Another great game using these rules, all bodes well for the Battle of Minden in a couple of weeks.

For a fuller AAR and a lot more photographs see the club's Facebook album here.