Last Friday saw five of us gather at New Buckenham to play a new period and new ruleset, to the club anyway. The game was set in the Korean War and used Warlord Games Bolt Action rules.

All the figures were supplied by the game's umpire, his lock down project, in what was to be a rule learning night for all of us.

The scenario saw a US Mobile Army Surgical Hospital (M*A*S*H) unit threatened by advancing Korean Peoples' Army (KPA) and Chinese People's Volunteer Army (PVA) troops with only two squads of USMC to protect them while they tried to evacuate their patients and staff.

The two marine squads were dug in along a hill crest with a bazooka team in support and would have to hold off the communist hordes for ten turns to enable a full evacuation of the patients, by helicopter, and staff by road convoy.
It didn't take us too long to pick up the general gist of the rules, the biggest slow down was checking who had what weapon when firing to get the ranges and modifiers correct.
The massed KPA and PVA troops were soon advancing towards the dug in marines with only the slightest encouragement required from their political officers' pistols. The communist fire was eerily accurate inflicting casualties and pins on the US forces almost at will. In contrast my squad on the US left seemed unable to hit the broadside of a barn door, no matter how much lead I slung at them.
The Chinese infantry were soon joined by an old captured Japanese Ha-Go tank, which started to add HE shells into the mix of fire hitting my squad.
Our bazooka team failed in their one attempt to take the tank out before they in turn became casualties themselves. The one bit of success the USMC did enjoy was the right hand squad taking out the PVA medium machine gun. With the PVA and KPA seemingly concentrating on my squad and the centre command team, the left squad started to shift to their left in support.

It all proved too little too late, my poor dice throwing all night saw my much reduced squad finally rout while a Chinese officer and bugler finally saw off the USMC 2nd Lt in hand to hand combat. The second marine squad was also now taking casualties as the Chinese troops shifted their attention to them.
The umpire called the game at this point. The outnumbered USMC had held on long enough for fourteen of the twenty casualties to be evacuated along with many of the hospital staff, for those left POW camps loomed.
A great first outing for Peter's latest collection as well as an introduction to the Bolt Action rules. 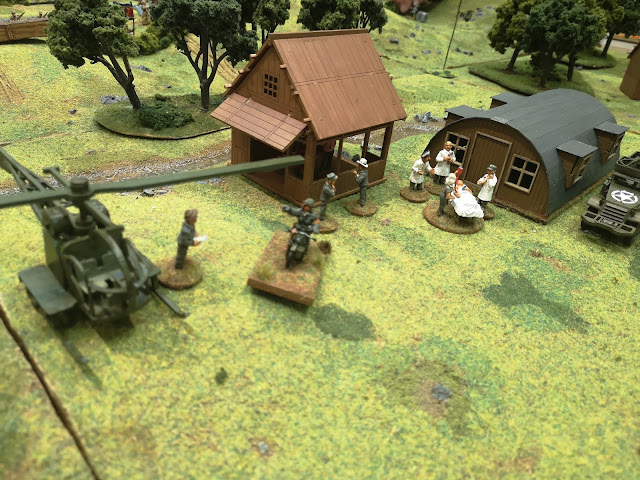 More pictures as usual in the club's Facebook Album
Tony.
Posted by Tony Miles at 10:50