On Friday night at New Buckenham we had an AWI game. It was a fictitious scenario that saw Washington attempted to deny General Howe's advance guard from crossing the Indian Run river as the Crown forces pushed on toward the capture of Philadelphia. We used our club rules for AWI ,which I will eventually get round to digitising.

I took command of General Grant's brigade which consisted of the 9th, 21st, 38th and 24th foot on the British left flank facing the rebel battalions of General Sullivan across a shallow stretch of river.
To my right were three battalions of Hessians under General von Knyphausen who were making for a plank bridge over the river. Unbeknown to the revolutionaries General Cornwallis was making a flank march to the far right with the Black Watch, a light infantry battalion and a combined grenadier battalion.


My command advanced across the ford towards the waiting rebellious colonials while the lead Hessian unit was met by a head on charge, by a unit from General Lee's command, determined to stop the Germans from gaining a foothold on the other side of the bridge. 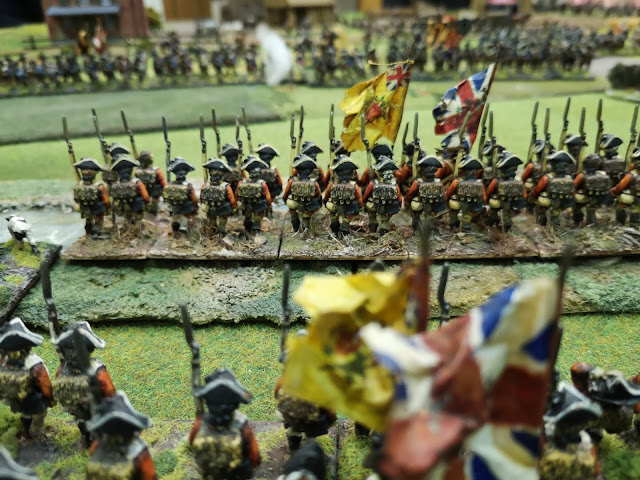 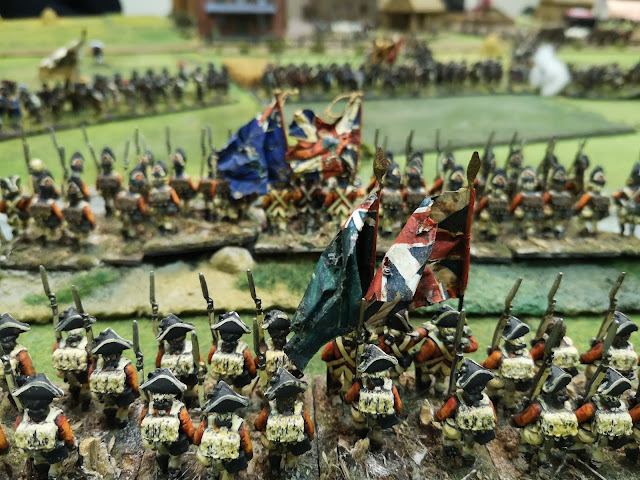 After a vicious scrap at the bridge the lead Hessian battalion managed to fight their way through the Pennsylvanians and establish a bridgehead before being assailed on three sides. Included in this assault was the lead element of Washington's reinforcements, a battalion of marines. This attempt to throw the Germans back got off to a slow start thanks to support from my 12 lb artillery who had now switched their focus to supporting the isolated Hessians.


This delay allowed the Hessians to dress their ranks and get further battailons across the bridge in support, before continuing their attack.


It was around this time that Cornwallis' brigade arrived on Washington's flank, forcing him to turn his remaining reserves to face this threat and so relieving some of the pressure on the Germans.

Back to my command. After finally fording the river under musket and light artillery fire my lead battalions were given the order to level the bayonets and charge!

Unfortunately both units declined to obey and it was only the direct intervention of General Grant that finally saw the fusiliers charge home against the regulars of the 1st Maryland battalion. The 9th however could not get to grips with the stubborn 2nd Maryland battalion and a close quarter musketry duel commenced.

The 1st Maryland broke before the determined charge of the fusiliers who followed up after the routing colonials. This left room for the 24th foot to charge into Sullivan's militia battalion, with the expected result.


At this point the game was called. On my flank two of the three continental battalions had routed, despite inflicting heavy casualties on my troops, 177 in total. In the centre the Hessians were now firmly across the bridge and pressing on with Cornwallis soon to make contact on the right.
It was deemed that Washington would rapidly withdraw his remaining forces after a hard fought action.

Another great game, many thanks to the two members whose figures were used.

As usual lots more photos and AAR in the clubs Facebook Album.